This Is America showcases Donald Glover’s mastery of 2018. He understands a myriad of concepts perfectly, from core controversial social issues to the best aspects of popular art and rolls them into, arguably, one of the best music videos 2018 has seen yet.

The video is a brutal satire and commentary on all the controversial issues the black community is facing right now (has* been facing but just now cracked mainstream conversation) and Glover touches on these issues by being overtly and unapologetically black in this video, a video he knew would be shown across a widely white and mainstream audience when it premiered on Saturday Night Live. He cycles between the seriousness of shooting up a church choir with an AR-15 and then perfectly executing popular dance moves in the next step. He is placing the ridiculous next to the traumatic, a living, breathing, twitter timeline. His aggressive acts of violence against black people to the instantaneous switch to performance mode emphasize how black people are expected to deal with their trauma. There are black bodies in the street and mainstream media are still consuming black culture as entertainment, being allowed the privilege to ignore their plight while still benefitting from their labor.

Black communities created the popular dance moves Glover executes, the same moves non-black people cop into meme-able moments and viral tweets. It stresses black people only get to comfortably exist in our culture as long as they’re doing the entertaining; there isn’t the same amount of space afforded to discuss their oppression, only room to chop them into palatable bites that white and mainstream audiences can comfortably consume.

Glover continuously dances around the empty warehouse in a happy-go-lucky fashion, inspiring comparisons to his movements to black caricatures during the Jim-Crow era. Glover’s performance steals the attention from the intricate mess of chaos, violence and death that is so plainly in the frame, if one bothered to pay attention. Glover is showing us the theft and use of black culture as entertainment while the trauma their communities face gets literally left in the background.

In the very sparse serious moments of the video, the few seconds Glover commits gun violence, we can see his intense, concentrated anger. He shoots unarmed individuals then carefully hands the gun back into an outstretched hand, waiting to fold it into a silk red cloth. The guns are precious, cradled and protected and taken from the scene while the bodies are left where they fell, a critique on the NRA’s fierce defense of the gun while black bodies are left feeling disposable. 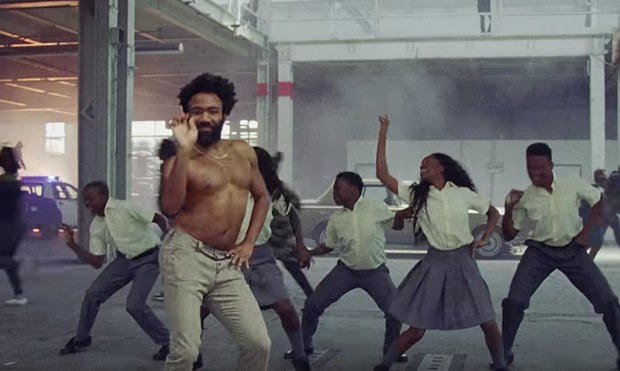 One of the most powerful moments of the video is when Glover is dancing with children in school uniforms. The moment is sans violence and seemingly carefree until Glover pulls his hand into the shape of a gun and everyone scatters and the music is cut. He is a black man who had his hand mistaken for a gun. 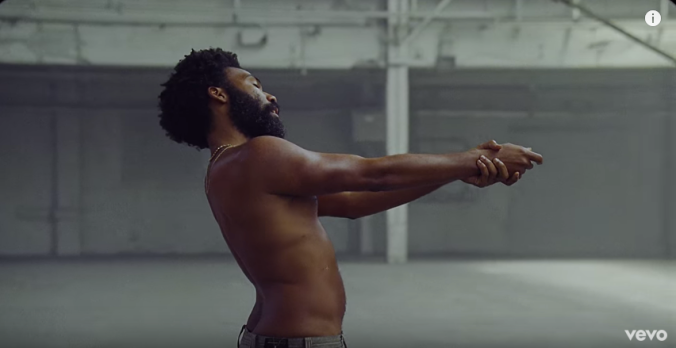 Glover is clearly outraged. He is dancing out his rage, and hyper aware at how ridiculous and arguably futile that is. This is one of the only coping mechanisms that is left in Trump’s America, and it is so comically, outrageously not good enough. Oppressed communities are left feeling powerless while Trump is in power and inspiring a resurgence of racism. It’s that anger that is so prominent in the video, so artfully swung around to laughter or palatable gif moments. It’s what we do. We get mad and make a laughable meme about real pain. It is 2018’s shitty coping mechanism. We’re making memes and getting distracted and shit is hitting the fan.

The video ends with a shot of Glover running through the empty warehouse again, this time at night. He is being chased by the people who were just in the background of his video, the ones inciting and participating in the chaos. His exaggerated smile is gone, he wears a face of screaming horror as he, quite literally, runs away from the chaos.

There is, of course, the question of Who Is This Video For? First and foremost, it is obviously Glover’s reintroduction to the music world, it had a responsibility to go viral and hype the rest of the work that will follow. In all of it’s criticisms, in all of it’s highlights of the issues that plague black communities, it merits a response of ‘we been knew’ from black people. He is not saying anything black people did not already know. He is, arguably, further desensitizing us to violence against black bodies, as he unblinkingly shows them gunned down, their blood spraying across floors and walls, their unmoving bodies left in frame. Is this for shock value, to show mainstream culture exactly what America’s gun culture and racism has done to marginalized communities? Or is it further traumatizing an already hurt community that does not want to see the violence they know exists used in a music video to sell albums? Is this Glover putting black issues into a video he knows will be broadcast on Saturday Night Live, in an effort to shove them into the front of the conversation? Is it the continued commodification of violence toward black people? There are many critiques, many narratives that can come from any direction, all asking credible questions and offering sound critiques. Maybe the point was to get people talking.

There are several layers and several interpretations to Glover’s video. I have not explored them all. Thank you for this disturbing and mesmerizing video, Childish Gambino, your presence in music has been sorely missed.

Watch This Is America below: