There is never a shortage of glamorous and fun events during New York Fashion Week, and 2017 was no exception. Refinery29 treated New Yorkers to a playground of social-media friendly interactive rooms in a giant warehouse in Williamsburg. The event, 29 rooms, is exactly what it’s name suggests with 29 immersive rooms spaced throughout the warehouse, each unique in design, theme, and artist. The event lasted three days, with all 18,000 tickets selling out in advance and reselling at an average of four times their original price of $19. In only it’s third year in New York, it has already amassed quite the following and hype, even before it added star-studded artists to it’s line up of room designers such as Jake Gyllenhaal and Emma Roberts. The rooms are meant to be visually pleasing and amp up your social media page, attendees are encouraged to take as many photos as they can as they immerse themselves in each of the interactive exhibits. It was rare to walk more than three feet without seeing someone with their smart phone out. Just walking past the place is overwhelming, with lines that stretched for blocks and blocks, all around the warehouse. 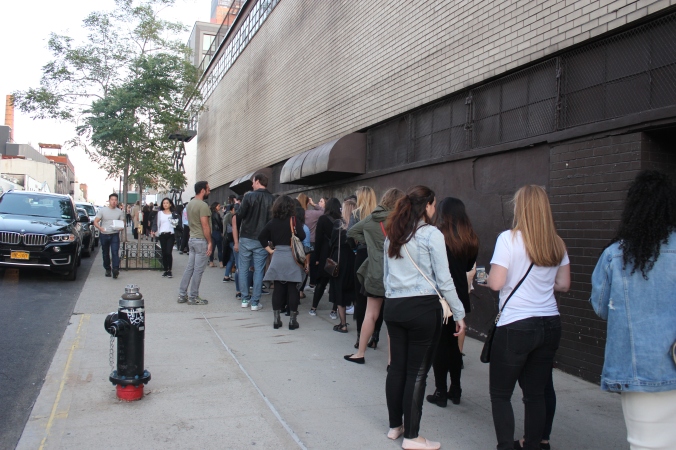 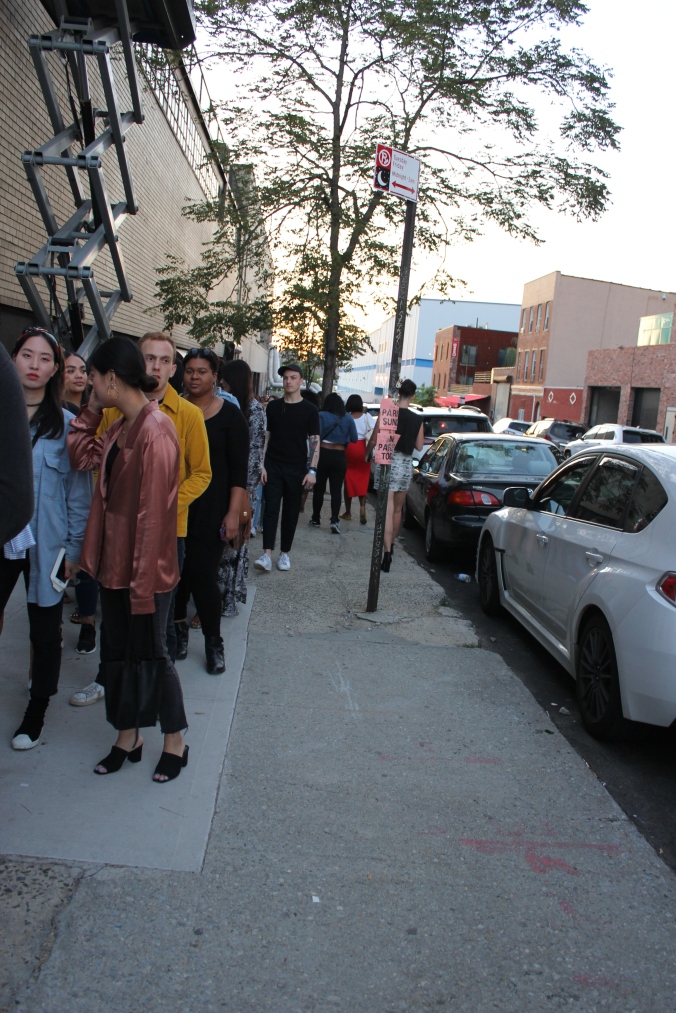 Walking inside is another story, The warehouse looks more like a club with young people loitering outside, smoking and eating ice cream from the Häagen-Dasz booth stationed out front. The place is carefully roped off with security checking everyone’s ticket and handing out bright blue wristbands. 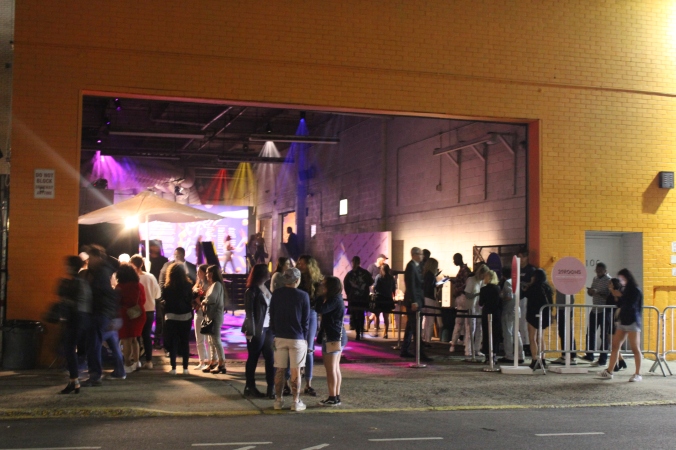 The first thing you see when you walk in is a giant mural of artists and sponsors, and a paragraph explaining the exhibit and everything you’re about to experience.

The long line seemed absurd from the outside, but once you were inside and truly grasped the true size of this 80,000 square foot warehouse, there was more than enough room for hundreds of people to roam around. 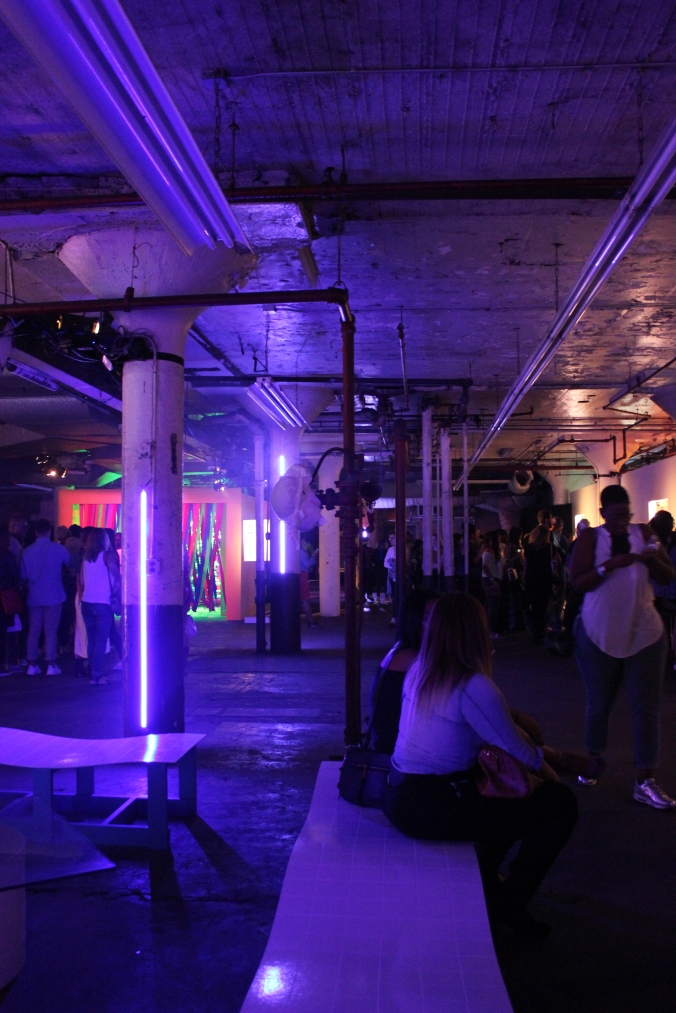 the area outside the rooms was low-lit with minimal seating and house music soundtracking the event. Photographers and cell phones were everywhere.

One of the most popular rooms was not even a room, it was a mass of circular lights for walls, inviting attendees to pick up a paint brush and draw or write whatever they wanted across the lights. 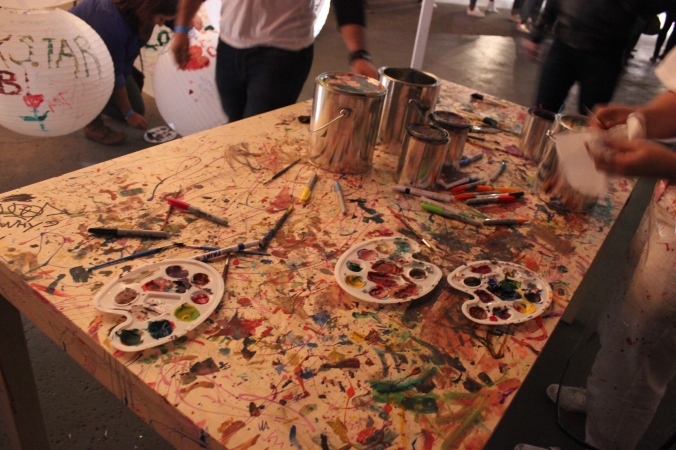 A table waited outside the exhibit, full of paints and markers for the attendees to use. 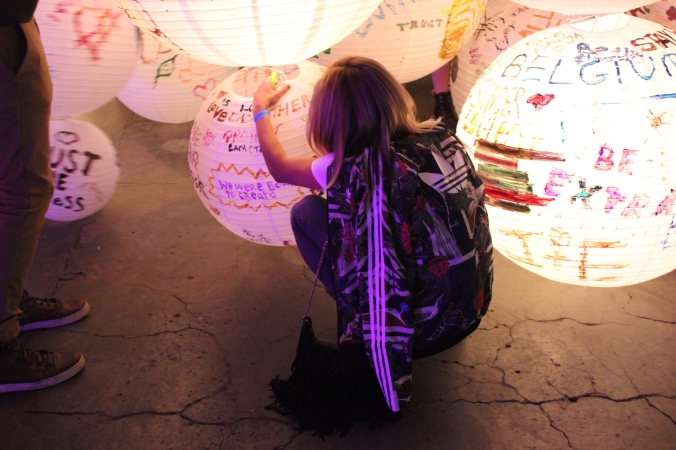 Some people chose to start writing on the outside…

…while others walked in and started documenting the exhibit or grabbing a ladder and becoming a part of it. 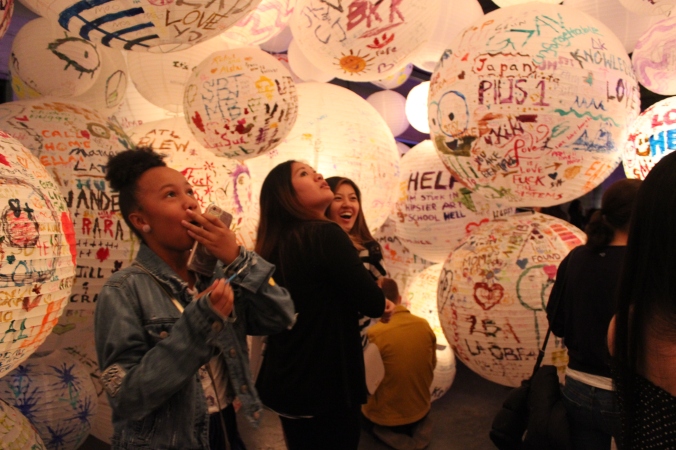 The most prominent addition to this room was the “Jordan, will you marry me?” sprawled high across one of the high-hanging lights. Attendees gasped when they saw it and took many photographs. 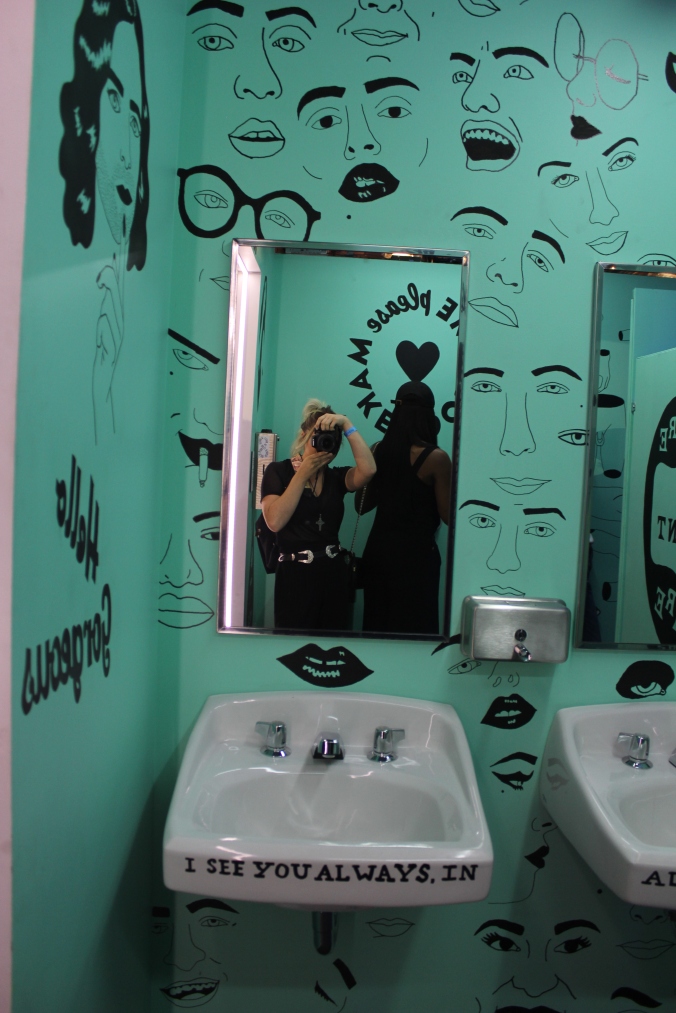 what would have been a normal bathroom had been painted over sea foam green, and patrons initially had to look in the mirror upon entering. A wall of faces stared back. “I see you always, in all things,” read the bottom of the sinks. 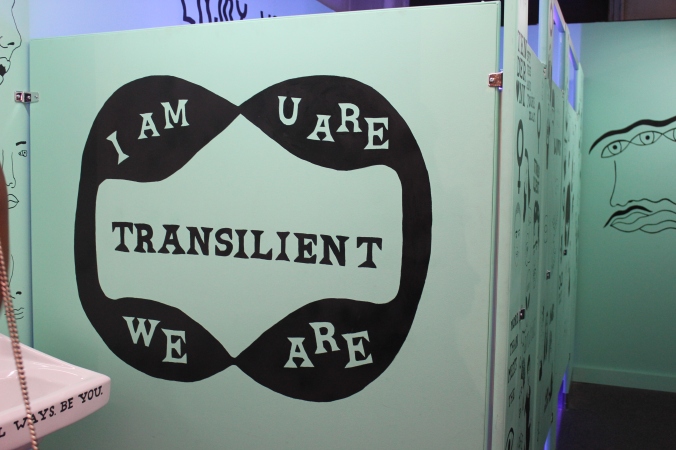 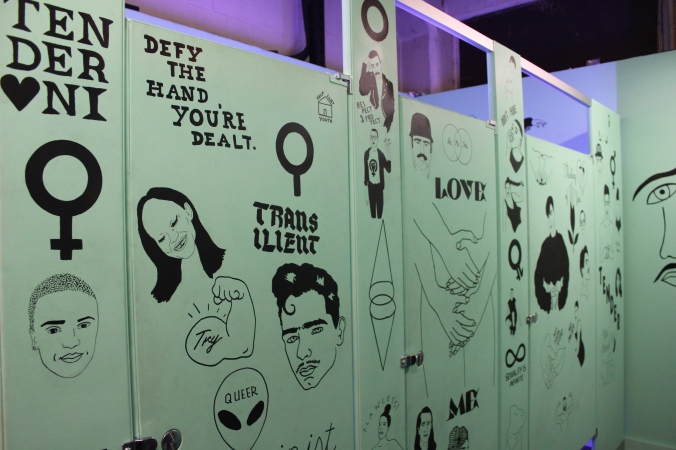 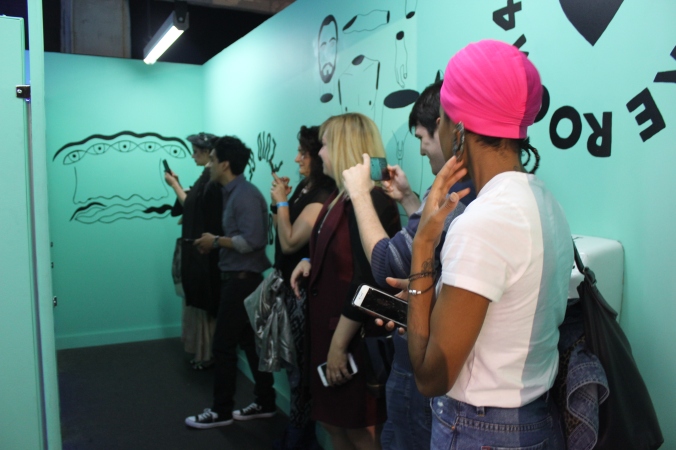 What appeared to be a normal line for the bathroom was actually patrons standing in line to enter one of the stalls, where they would be invited to sit down and listen to stories of self discovery about gender and sexuality.

Room 24 – Hear Our Voice. The Women’s March also had a room on display at the exhibit, highlighting the importance of using art as a medium to use our voices.

Women were encouraged to write letters to their senators, congressman, or just write out their feelings and share their voice.

There were also fun rooms with lighter themes, such as Room 15 – Cloud Pool. Attendees were invited to jump right into this room, made to feel like a piece of relived childhood.

There was definitely no shortage of women empowerment, with Room 11 entitled The Future is Female. Designed for people to take their frustrations and make them into art, patrons were invited to punch and yell out at punching bags with empowering phrases written across them.

Lights and sound were a big part of 29 rooms, like this room who had it’s source of light come from boxes that changed colors and brightness alongside the beat of the music. 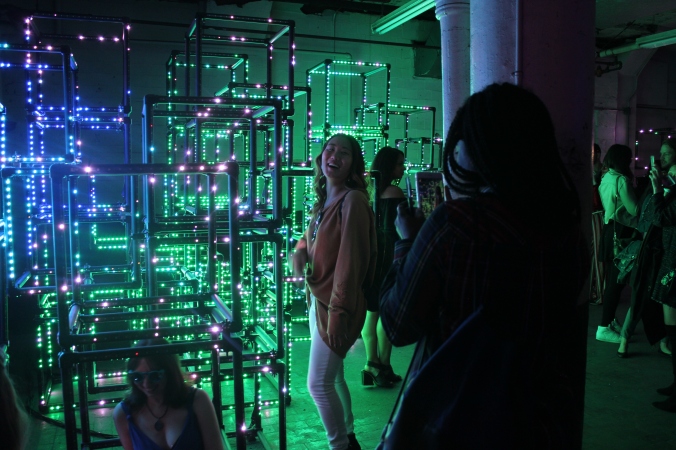 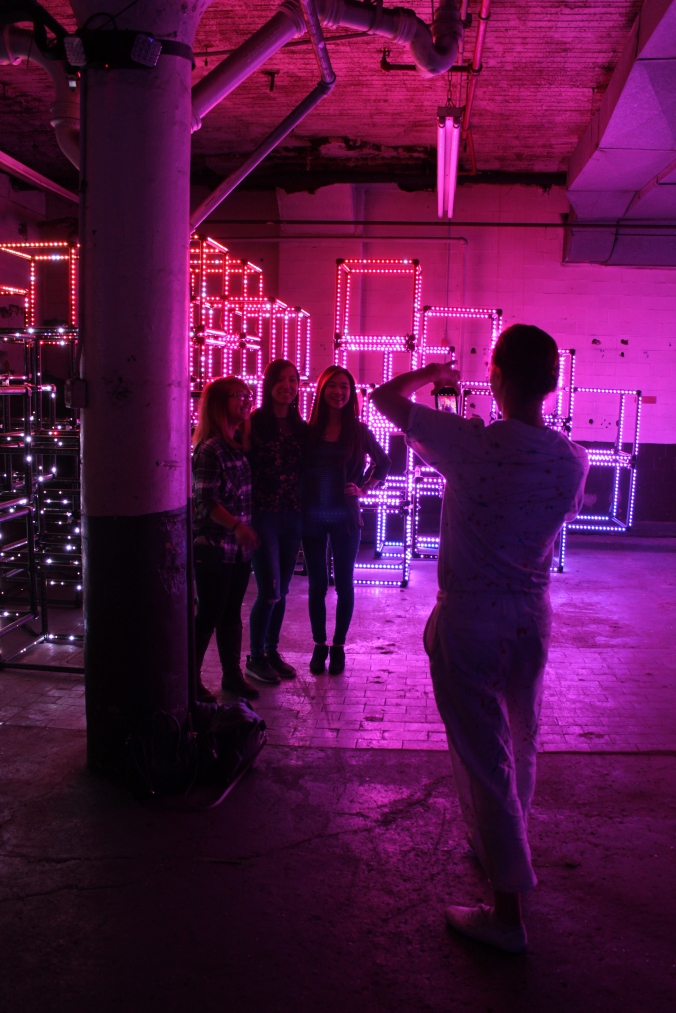 Room 27, Laugh-O-Matic was made especially to put smiles on people’s faces as they wove through the room and blew bubbles at each other.

Planned Parenthood was also invited to create a room for the event, Room 7 titled “Bright Future”. 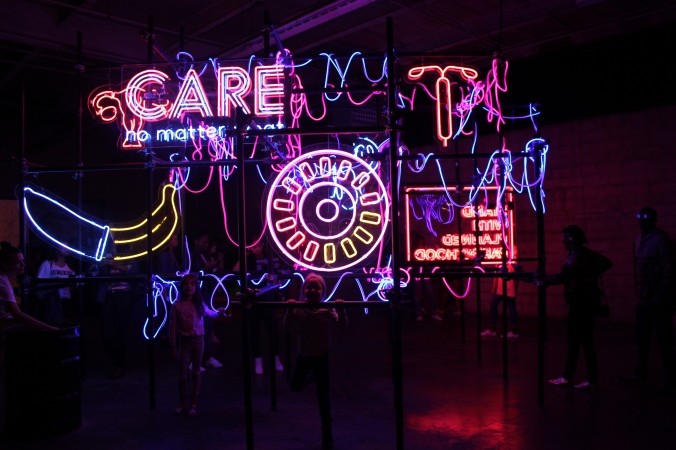 There were several other rooms spread throughout the space, each one fun or moving or memorable within their own right. Check out the photos from the rest of the rooms below: 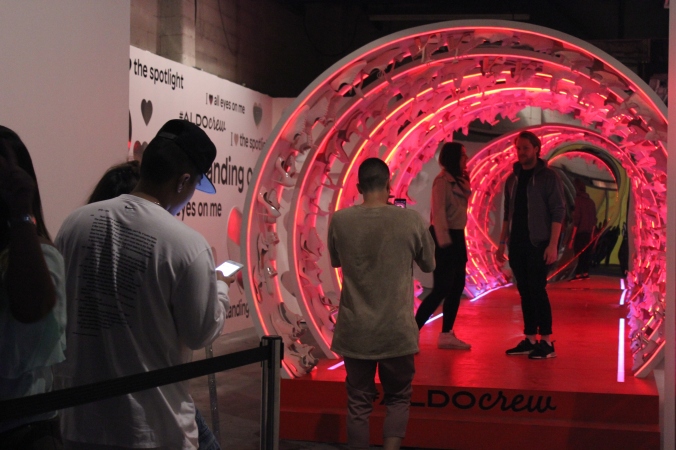 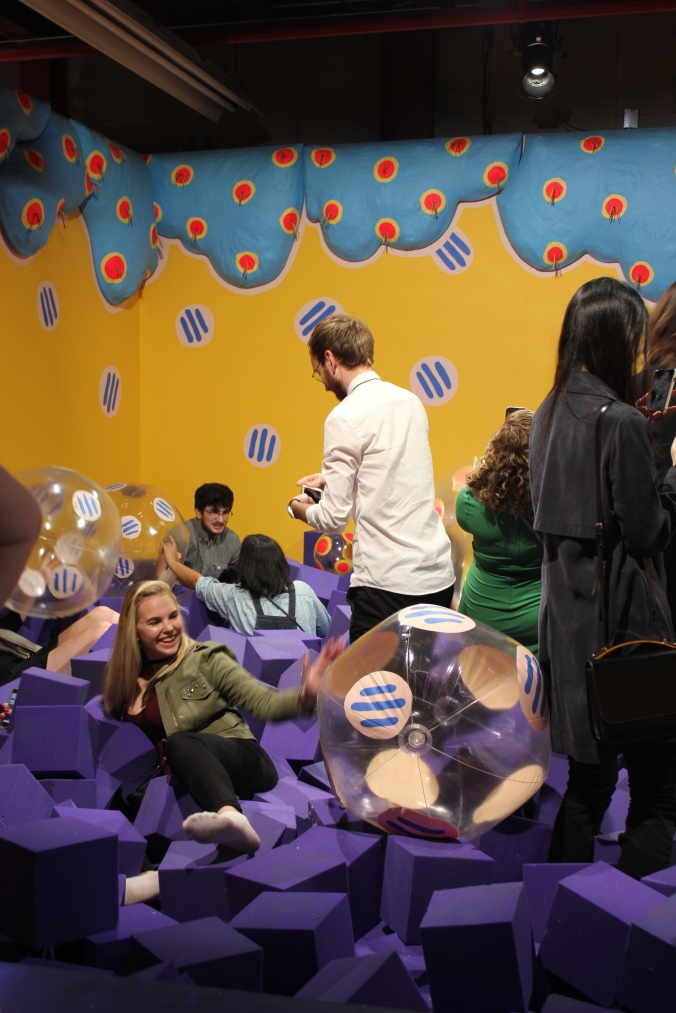 The only thing not photographed at the most instagram-able event in the city?

One thought on “A Walk Through 29 Rooms.”